For Padmini, coding is like creating her own logic.

“When you write your own code, it feels like you are discovering something new – it's so pretty, and easy for my mind to settle into it,” she says. 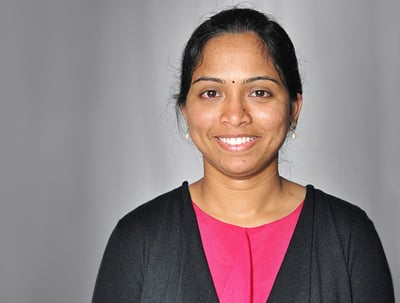 Although coding came easy for Padmini, finding a job in technology wasn’t as simple. She received a degree in technology in her native country India, but as a new mother she didn’t have a chance to practice her skills – she focused on raising her children.

Padmini and her family moved to the United States and her children grew older. She was eager to work with computers again, and ready to find full-time employment. She applied to several jobs, but had no luck getting an interview.

“Everyone was asking for a degree from the United States and experience in the field." she says. "I couldn’t go back to school with my kids, and how can I get experience if I can’t even get my first job? I had so much disappointment. What could I do? I had no way in.”

When I found CoderGirl it was the most fabulous thing

Discovering LaunchCode’s CoderGirl program was Padmini’s first step in. With her husband's recommendation and support, Padmini began to attend CoderGirl, a structured meetup for women coders. The supportive community helped her sharpen her skills. “When I found CoderGirl, it was the most fabulous thing," she explains. "They help all women and encourage everyone.”

After Padmini improved her skills and her coding project, LaunchCode placed her as an apprentice at MasterCard. “Everyone at MasterCard was so welcoming," she says. "My supervisor gave me goals for how to pursue development and get ahead in the company.” Padmini was offered a position as a fulltime software developer at MasterCard after her apprenticeship. She loves the fact that she now has the chance to mentor other LaunchCode apprentices.

"I spread this opportunity to all of my friends, especially working mothers who have less experience because they were raising their children," Padmini explains. "Like many of them, I knew what I wanted to do, but I didn’t know how to reach my goal. LaunchCode is like GPS for career-seekers. It helps you reach your destination."

Meet a LaunchCode Apprentice Years ago Felipe saw an ad in which Bill Gates and Chris Bosh,...

When I started learning how to code, I knew the biggest challenge would be transitioning those...

I decided to become a programmer because of an ATM.