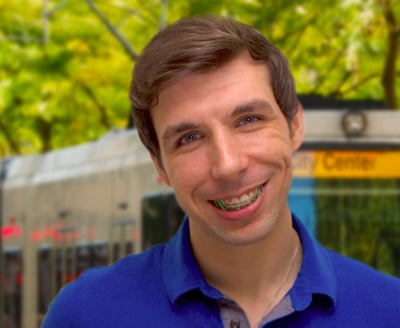 How did you hear about LaunchCode?

I heard about LaunchCode through Udacity. It was suggested by the career advisors as a great opportunity to break into the industry.

I felt that if there was even a slim chance I would be accepted that I should apply.

After hearing about LaunchCode, I decided to look into it a little more thoroughly. The stories of everyday people just like myself making it into the tech industry through the apprenticeship program struck a chord. It gave me hope that I really could make it too. Though I was living in Denver at the time and knew finding an apprenticeship through LaunchCode might be a long shot, I still felt that if there was even a slim chance I would be accepted that I should apply.

Tell us about your background — work history, education, interests, etc.

I studied Fine Art at the University of New Mexico. Towards the end of my degree, I realized it wasn’t the right path for me and started looking for other career avenues. I have always been an avid lover of technology, and it was around this time that I started considering how that could play a role in my career. That eventually led to my decision to become a coder after having worked in the service industry for nearly 10 years. Recently, I’ve begun transitioning into the world of software development as a code reviewer.

I knew building software was what I was meant to do.

I started to take in interest in coding when the iPhone first come out. It was an incredible device, and I really wanted to understand how it worked under the hood. It was when the iPad was announced though, that I decided I actually wanted to learn programming. With the iPad, I knew there would be another boom for the App Store just like with the iPhone, and I wanted to be part of it. I spent the next two months teaching myself enough Objective-C to build an app, and just a few days after the iPad launched, it was released to the App Store. After that, I knew building software was what I was meant to do.

Swift is just a joy to work with. I’ve been following it since its initial release and the evolution has been really fun to see!

Do you have a particular area of expertise or a favorite programming language?

My main area of expertise is iOS Development, and I love doing it Swift. I’ve dabbled in other languages, but Swift is just a joy to work with. I’ve been following it since its initial release and the evolution has been really fun to see!

Tell us about your code learning experience. Where did you build your skills?

When I decided I wanted to pursue a career in coding, I enrolled in a couple of college courses to get the ball rolling. Unfortunately, after enrolling, I was unable to continue the coursework. Though I desperately wanted to move forward with coding I needed an alternative method to learn. Luckily, the internet is a wealth of knowledge! I started going through tutorials online and watching YouTube videos. The free Computer Science courses from Stanford and MIT are also fantastic resources. The most growth though, came from Udacity’s iOS Developer Nanodegree program. It provided all the benefits of structured coursework, but I was able to work it around my schedule. Upon finishing the program, I had completed five portfolio apps including one of my own design.

What are you currently working on mastering?

I’ve started learning Java and Android Development. iOS is great, but it’s tremendously important to branch out and pick up new skillsets. I also have iOS apps I’d like to port to Android, which is a great excuse to learn it! In addition to Java, I’m learning about backend development by building a blog using server side Swift.

What would be your dream professional role or industry?

I’m hoping to find a position working with a team where I can help solve problems and make meaningful contributions, while also continuing to push myself as developer. Music and outdoor recreation are important parts of my life, so working on apps with focus in those areas would be incredible.

Working with the great people at LaunchCode has been wonderful. It’s always apparent just how much everyone cares and is really invested in helping candidates find positions.

Working with the great people at LaunchCode has been wonderful. It’s always apparent just how much everyone cares and is really invested in helping candidates find positions. I really appreciate all you do!

The Melody of Code

The Sound of Code is Music to Their Ears At first glance, it may be hard to find the relationship...

Moving Out of a Job and Into a Career A year ago, I was a supermarket cashier with a bachelor's...

Meet a Mentor We couldn't carry out our mission to educate and employ eager, driven tech talent...