The CoderGirl curriculum receives a fresh, new name to reflect its expansive base of technologists.

We’ve known for a while that the name of our CoderGirl program does not adequately reflect the awesomeness of our learners. You’re not girls – you’re talented, driven, motivated, confident technologists who identify as women, trans, non-binary and gender non-conforming. You deserve a program name that more accurately represents all of you and we’re so happy to announce that LaunchCode is officially eliminating the name CoderGirl and instead referring to the program as LaunchCode Women+. 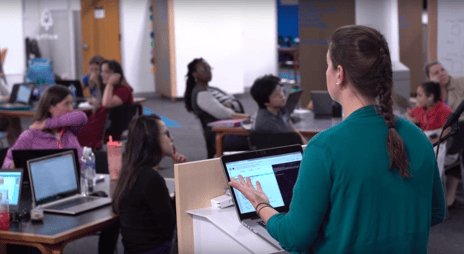 While CoderGirl began as an informal meetup in 2014, the program has formalized into one of LaunchCode’s flagship curricula and we believe now is the time to ensure its name and branding move completely under the LaunchCode brand. We hope that by including LaunchCode more prominently in the name, employers will have an easier time recognizing the program as a permanent and formal training program under the LaunchCode umbrella. After all, LaunchCode employer partners hire our students based on the skills they possess, not the name of the program. We’re all LaunchCoders!

So, what’s up with the plus sign, you ask?

LaunchCode’s mission is to create accessible pathways to careers in tech, especially for communities vastly underrepresented in today’s tech industry. Using "women+" is something we put a lot of thought and research into and is a term other forward-thinking organizations around the world use, as well.

We want it to be clear that LaunchCode Women+ is a welcoming space not only for women, but is also intentionally inclusive of those who are trans, non-binary and gender non-conforming.

The plus sign not only makes the name more inclusive, it also tells the world that technologists of marginalized gender identities deserve spaces and communities where they feel welcomed and supported.

Overall, the great things about the program will remain the same and we’re excited to continue to see our LaunchCode Women+ graduates break barriers and crush stereotypes in tech spaces across the country.

To learn more about LaunchCode Women+ or apply to an upcoming cohort, check out launchcode.org/women-plus. Applications are now open for the upcoming
St. Louis cohort beginning March 23.

A Simple Challenge Turned into a Career You often hear that programmers are drawn to coding because...

We recently got to catch up with one of our company partners, Sagitec, in Tampa Bay, Florida....

Here’s to the new year and new opportunities for LaunchCoders

We’re celebrating the end of a long and trying year with hope and excitement for what’s to come in...