A Simple Challenge Turned into a Career 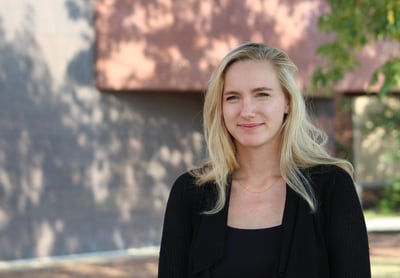 You often hear that programmers are drawn to coding because it comes naturally to them. LaunchCoder Carly smashes that mold: she began coding to push herself intellectually because the logic didn't come naturally to her. Now, Carly's a software developer at Boundless.

How did you first hear about LaunchCode?

I’m originally from St. Louis, but I had just moved back from University, where I studied Anthropology. My sister mentioned LaunchCode because a friend of hers was marginally involved, and I thought it sounded like a cool organization. I was interested in getting to do things out in the city other than, you know, working. So, I saw something about a CoderGirl Meetup on Wednesday nights, and I went to that. I’ve been at LaunchCode very frequently ever since!

What was the driving source for moving toward programming?

I viewed computer science as just one of those life skills that I needed to learn - like finance or something like that - and I didn’t have time to take any computer science classes in college, so CoderGirl was an opportunity to be in a learning environment again.

I sort of reached a point of stagnation teaching Python to myself and going to CoderGirl Meetups where I wasn't really sure if I was progressing at all. I heard an announcement around this time for “Hello, World” at CoderGirl and I thought, “That’s going to be great, having a little more structure.”  I went to “Hello, World” for four weeks before LaunchCode announced LC101 - I applied and then was accepted!

This is something you probably don't hear often, but I was really drawn to programming because it doesn't come naturally to me, and I really enjoyed that intellectual challenge. The logic will trip me up every now and then, but it feels really good when I do grasp the concept. I continue to enjoy the challenge.

This is something you probably don't hear often, but I was really drawn to programming because it doesn't come naturally to me, and I really enjoyed that intellectual challenge.

You've been a part of a ton of LaunchCode programs. What were your expectations going into them?

For CoderGirl, the best part was that it was so approachable. Everyone was so welcoming and open. None of it felt intimidating, and I definitely was intimidated before I started. I went in with the expectation that I would feel out of place, and I didn't at all. So, that expectation was completely different from reality.

I was a little bit intimidated when I finished the class, but then LaunchCode pulled through and offered mentor services to help me cross that gap.

When it comes to being placed for an apprenticeship, I didn’t really know what a developer’s day-to-day life looked like. And really, I still don’t. It’s been about six months since my placement, and I’m still learning what the different roles are and how I interact with them. I’m still learning along the way.

Now that you crossed that gap, what are you doing now?

I’m a software developer at Boundless. I work on a team of about 5, and we do the agile method. I have a stand up meeting everyone morning, and I check in to let everyone know what I worked on and what I plan on working on. It’s really nice, being the most junior member on the team, to have an opportunity to talk to someone face-to-face to talk about challenges I ran into.

I work in React and JavaScript, making a developer’s kit that will be the back engine for a number of apps for our company. This particular product is a toolkit to quickly stand up an interactive map on the web. I’m continuing to learn more about what’s involved in managing a software product. To see all the thoughts that go into molding this thing that doesn't exist yet into something that people will use is really cool.

To see all the thoughts that go into molding this thing that doesn't exist yet into something that people will use is really cool.

Did LC101 prepare you for your job?

What LC101 really teaches you, fundamentally, is the ability to solve problems on your own. So, back when I was in front-end development track, LaunchCode didn’t teach JavaScript frameworks, but I was taught enough to learn them on my own. I mean, it obviously prepared me well because I wouldn’t have an apprenticeship without it. It’s a really neat mix of presenting you with all the toolsets you need but then also presenting you with the mental tools to fill in the blanks.

What LC101 really teaches you, fundamentally, is the ability to solve problems on your own.

What did you learn about yourself in that class?

What would be your advice to someone who’s contemplating signing up for the next class?

I would say without hesitation that they should sign up for the next class. On the student’s end, you don’t have anything to lose from trying it. If you have the drive, you can do it. There’s very little you need upfront to start, and it’s really intimidating because it doesn't seem like that’s the case but it really is!

///  You heard it from Carly: if you have the drive, you can do it! To get started on your own intellectual journey, visit https://www.launchcode.org/learn. Who knows where learning something new will take you?!