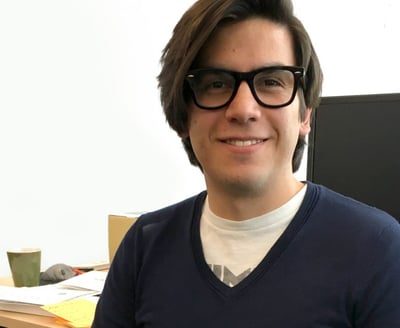 Years ago Felipe saw an ad in which Bill Gates and Chris Bosh, amongst others, explained the importance of learning how to code. Inspired, but with zero experience or education in coding, Felipe had no idea he could actually achieve a career as a programmer.

Felipe is originally from Ecuador. He came to the United States to receive his bachelor's degree from UMSL, but he couldn't find a job after graduation. He was forced to return to Ecuador and started to dabble with code and take online courses in his spare time.

A tech job might seem unattainable to people without a CS degree and experience, but LaunchCode makes it available to anyone willing to work hard for it.

After marrying his longtime girlfriend and returning to the United States, Felipe came across LaunchCode and suddenly landing a career in coding became more of a reality. "It wasn't until I heard of LaunchCode that I even gave the possibility of finding work as a developer some thought," he says.

Felipe listened to LaunchCode's guidance regarding what he needed to learn, what courses he should take, and what books to read. "Thanks to LaunchCode's advice I was able to develop the skills necessary to get my apprenticeship as a mobile developer," he says.

To me, LaunchCode is opportunity

LaunchCode then placed Felipe at an apprenticeship at Express Scripts, where he performs his dream job every day. "To me, LaunchCode is opportunity," he says. "A tech job might seem unattainable to people without a CS degree and experience, but LaunchCode makes it available to anyone willing to work hard for it. I would have never thought I could have a job as a mobile developer, yet somehow here I am, sitting behind a computer learning from a group of incredible developers, and working on something that might reach millions of people. And that is all because of LaunchCode."

LaunchCoder Q & A With Kyle

Meet a Student What motivated you to sign up? Working in IT networking and troubleshooting has...

When I started learning how to code, I knew the biggest challenge would be transitioning those...